The Salem Police Department and the Executive Office of Public Safety and Security’s Highway Safety Division would like to remind everyone to "Keep the Holidays Happy. Drive Sober.” Make the right choice this holiday season and don't drink and drive.

All phone lines are now back in service.

The Salem Police are currently experiencing problems with our main phone number 978-744-1212. We are aware of the issue and investigating the cause. This issue is not affecting our business or emergency lines.

If you have an emergency request for the police, fire, or ambulance please dial 9-1-1

Again, if you have a non-emergency request for the police please dial 978-744-0171 until further notice.

The problem has been rectified by our service provider and all lines are now back in normal service.

We have identified the issue with the phone line and are waiting on our service provider to resolve the issue. At this time there is no estimated time frame for that to be completed.

This outage only is impacting our 978-744-1212 phone number. All other emergency lines, direct phone lines, and fax lines are operating normally. Please continue to contact us at 978-744-0171 for routine or business issues and at 9-1-1 for all police, fire, or medical emergencies.

Our records division will be closed on November 27th & 28th 2014 due to the Thanksgiving Holiday. Records will reopen on Monday, December 1st 2014 at 10am.
Posted by Jake Frączek at 11:41 AM

The Salem Police Department is participating in the FFY 2015 Underage Alcohol Enforcement Grant Program. The program goal is to reduce young drivers (age 20 or younger) involved in fatal crashes. There are 3 activities that we are employing:

1.     Reverse Stings/Cops in Shops- This program places undercover police officers in a bar, nightclub, or package store. The undercover police officers stop anyone who looks to be under the age of 21 who attempts to purchase alcohol or who uses or possesses false identification.
2.     Party Patrols- This allows the police department to have dedicated patrols for breaking up underage parties.
3.     Surveillance Patrols- In conjunction with the above programs, the police department conducts surveillance in areas of suspected underage drinking.
Posted by Jake Frączek at 11:25 AM

The Salem Police in conjunction with the Massachusetts State Police have established a Text-A-Tip line for this weekend's festivities. The system allows for anonymous two way messaging between the public and the police. We encourage everyone to program the number into their phone, and to report any suspicious activity to us right away.


The Text-A-Tip was for the festivities and is no longer being monitored!


Although our staff will regularly monitor this service, it is not a replacement for 9-1-1 in an emergency. Citizens can also contact us at 978-744-1212 with any concerns.
The Salem Police thank the Massachusetts State Police for providing this valuable resource to us.

Bridge Street will also be closed at the North Street Overpass through the James Ayube Bypass Road at 10:00 pm through 11:30 pm.

The Salem Police will also be posting and enforcing "No Parking - Tow Zones" from 4:00 pm until 12:00 am on the following streets:

Additional roads may be closed on an as needed basis

Help us keep Haunted Happenings safe, contact us at 978-744-1212 with any public safety concerns. 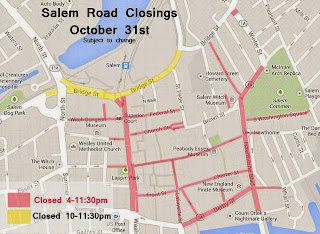 The Salem Police have also released the following informational pamphlet with information for parents to help keep this Halloween fun and safe for all. 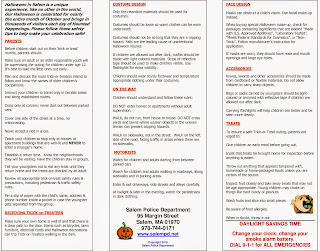 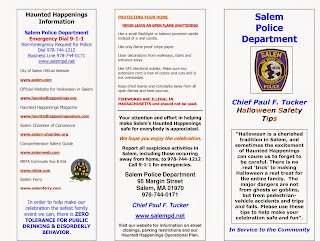 Be sure to check back later this week for detailed information about this weekend's Haunted Happenings Festivities.

The Salem Police remind everyone this will be another busy weekend in Salem. In addition to crowds and heavy traffic, residents should remember there will be the following road closures, parking restrictions, and special events:

Help us keep Haunted Happenings safe for all! Please report any suspicious or concerning activity to us at 978-744-1212!

The Salem Police Department is excited to announce our new initiative to expand our presence on social media. The department recognizes the potential that services like Facebook and Twitter can provide to allow us to expand our connection with our community. We have established official accounts on both Facebook and Twitter, and will begin posting regularly to both as well as our department's website.

Although we will regularly monitor messages and comments on these sites, we would like to remind the public they are not an appropriate method of contacting the department about in progress incidents. Please continue to contact us at 911 in an emergency or at 978- 744-1212 for non-emergency requests for assistance.

Any questions about this program should be directed to Lt. Conrad Prosniewski, Salem Police Public Information Officer at 978-740-0171 ext 200 or by email at cprosniewski@salempd.net.
Posted by no at 9:00 AM

SALEM, MA – The City of Salem has announced the following road closures and detours planned for events in October.

For additional information, please contact the Traffic Division of the Salem Police Department at 978-744-0171 ext. 115 or online at www.salempd.org or www.salem.com. Travel and parking information for Salem’s October Haunted Happenings festival is online at www.hauntedhappenings.org, with detailed parking information at www.parkinginsalem.com. Follow street closure and traffic alerts for October in Salem on Twitter at www.twitter.com/GetThruOctober (@getthruoctober).

All information below is subject to change. The Salem Police Department will close any street at any time if they determine that a public safety issue exists.

October 2: Haunted Happenings Parade starts at 6:00 p.m. at Shetland Office Park on Congress Street. Residents should anticipate traffic delays on Route 114 and Route 1A. Route 1A from Derby Street to Brown Street will be closed to traffic from 6:00 p.m. to 9:00 p.m. Other road closures are Congress Street, Washington Street, Essex Street from Washington Street to Union Street, Central Street, Front Street, and Washington Square West, North, and South. There will be no parking tow zones along the entire parade route. Log onto www.salem.com for more detailed information.

October 4 and 5: Haunted Happenings BizBaz. There will be no parking at the meters along the portion of Essex Street between Hawthorne Boulevard and New Liberty Street beginning at 6:00 a.m. on Saturday October 4 through Sunday October 5 at 9:00 p.m. This section of Essex Street will also be closed to through traffic from 9:00 a.m. to 9:00 p.m. on Saturday and Sunday.

October 31: Halloween events will include multiple road closures and heavy traffic delays throughout Salem for the entire day and night. Residents should expect major traffic delays on Route 114 and Route 1A. Downtown streets will close to all traffic no later than 4:00 p.m. These road closures include: Essex Street at Crombie Street and Barton Square to Union Street, Washington Street from New Derby Street to Bridge Street, Federal Street from St. Peter’s Street to North Street, Washington Square North and West from Essex Street to Brown Street, Hawthorne Boulevard, Derby Street, Route 1A, Congress Street near Pickering Wharf, Charter Street, Central Street, Front Street, and Lafayette Street from New Derby Street to Front Street. Bridge Street at the Bypass Road will also close to all traffic between the westerly overpass ramps the Bypass Road from 9:30 p.m. to 11:30 p.m. for the closing fireworks.

The Salem Police Department is participating in the FFY 2014 Underage Alcohol Enforcement Grant Program. The program goal is to reduce young drivers (age 20 or younger) involved in fatal crashes. There are 3 activities that we are employing: