Trick or Treat is a fun event for the entire family, but it is important to remember to be careful. The streets of ghouls and goblins can give you a scare, but pedestrian-vehicle accidents and trips and falls can be more dangerous. Here are a few tips to make sure you have a safe and fun Halloween! 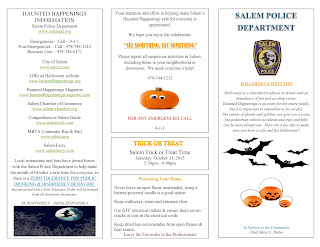 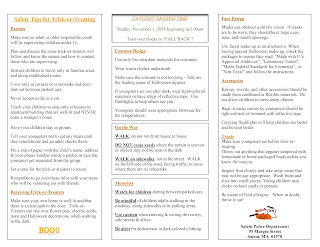 The Salem Police Department's Traffic Division announce the following road closures and parking restrictions for Halloween Night (October 31, 2015). Visitors are encouraged to review these road closures and pick alternate routes when coming to the city. Expect heavy traffic throughout the weekend, specifically along Routes 128 and 114 coming into Salem.

The following roads will be closed to traffic as of 12:00 noon time (or earlier if needed).
Bridge Street will be closed between the ramps to North Street and the Bypass Road at 10:00 pm and remain closed throughout the fireworks. 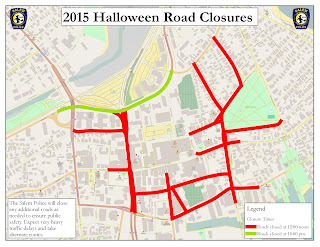 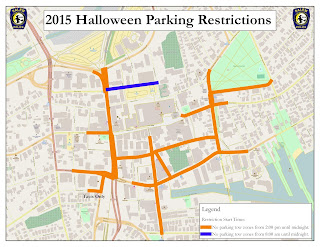 Visitors are reminded there will be heavy traffic along Route 114 and Route 128. If you plan on driving to Salem, please consider alternate routes when entering or leaving the city including: 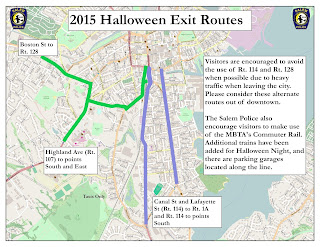 The Salem Police encourage the use of the MBTA's commuter rail when visiting the city. The MBTA has added extra trains Halloween night. There are parking garages along the line, and access to the subway system. See this page for more details about using the Commuter Rail.

The Salem Police will close any additional street, or make changes to the above plan, without notice to ensure public safety. Please use extra caution when traveling to Salem due to pedestrian traffic. Make sure to follow us on Facebook and Twitter where we will be posting live updates about traffic concerns.