Don't miss Salem's first National Night Out! National Night Out is an opportunity for the community to come out and build relationships with your police department. We'll be holding our first National Night Out on Tuesday, August 2, 2016 from 5 pm to 8 pm on Salem Common.  We will be showcasing a selection of police and fire vehicles, a demonstration by our Canine Unit, a bounce house, obstacle course, bike raffle, and more! Thank you to our sponsors Target, Home Depot, the Boys and Girls Club, Total Entertainment, and local businesses. 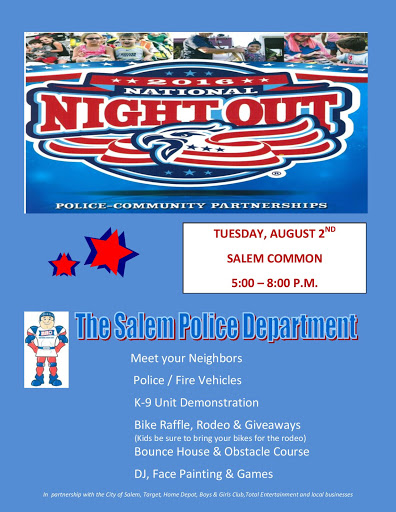 Thank You to Our Community

The Salem Police owe a huge thank you to our community for the amazing support we have seen over the last few days from our community.

A message from Chief Mary Butler

As you prepare your plans to visit Salem for the 4th of July, we encourage you to keep the following information in mind.
Activity Information
Public Safety
Transportation and Road Closures

We suggest you follow our social media accounts on Facebook and on Twitter for up to date information as the night goes along. Be sure to check back here and to salem.com prior to leaving in case there are any last minute changes that are made.