The Salem Police are very proud to announce that Officers Eric Gagnon and Denis Luti have been awarded the President's Award from the Massachusetts Coalition of Police at their annual conference today.

Officers Gagnon and Luti apprehended a dangerous armed suspect after a stabbing in June. Both officers showed a great amount of bravery confronting the suspect armed with a knife late at night and ultimately ended in his arrest.

We are extremely proud of the work Dennis and Eric did, and continue to do every day. Congratulations! 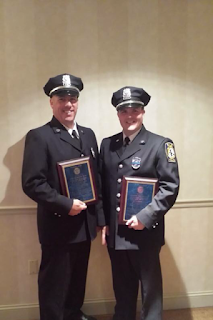